It’s been a year since this plandemic was officially declared in March 2020. Sadly, the agenda is being executed as planned. The majority of people are hypnotized by the spell of a manipulative, world-wide governmental collaboration under orders by the United Nations and World Health Organization. To their credit, the oligarchs, bankers and elite have had decades to devise the most effective, psychological form of torture through fear ever designed using modern technology for maximum impact.

Populations who have grown up in democratic countries previously untouched by oppressive forms of governmental regimes like communism, socialism, bolshevism etc. were oblivious sitting ducks when draconian measures were immediately imposed upon society “for their protection.” Canadians, Americans, Australians, Britons etc. are so frozen with fear, convinced their lives depend on their obedience to any and all non-sensical orders, they cannot see the real danger of Tyrannical governance right in front of them.

In the context of the plandemic, there is a war going on right now between good and evil. Man’s entire existence on earth has always constituted a daily battle between right and wrong. But ever so often, when situations reach a certain climax, God will step in and create HIS own reset. So who cares about the elite’s planned “Great Reset Agenda 2030?” Sadly, but not surprisingly, most super rich people are evil. They are prisoners of the material world, and in that world, money is king. They have sold their souls to the Devil to acquire wealth. They are never satisfied. They hunger for more money, power & control and will stop at nothing to get more. These are biblical times because our world has now reached another Climax.

We are now on GOD’s Timeline

The evil manipulators are moving forward with their devious plans using every trick in their arsenal to obliterate us. One of their main goals is to reduce the world population down to 500 million, so they devised very sophisticated, psychological techniques to encourage the masses to kill themselves and each other through the old tried & true method of “divide & conquer.” For the past year, God has been exposing all the lies. The truth is being revealed like dandelions in the springtime. Those who have faith will not turn against their fellow man. They will not choose to worship people in power who tell them to wear masks which prevent them from spreading the word of God. They will trust the body God gave them that has full capacity to maintain health if treated like a temple and not a garbage can. Those who believe the lie that is separating them from their humanity are choosing Satan. They are accepting “The Mark of the Beast” (the fake Covid vaccine). Nobody knows how long this grace period will last where people still have an opportunity to make the right choice, “till the fat lady sings.”

Your Choices and Actions are Rocking this World

Don’t sweat the stuff you have no control over. What REALLY, REALLY matters is what you DO. Each and every one of us is a source of powerful energy. We are now in the “Age of Aquarius,” a time when humanity takes control of the earth and its own destiny as its rightful heritage, with the destiny of humanity being the revelation of truth and the expansion of consciousness. The demons will do what they want to do, but their success depends on us doing NOTHING. This is not the time to cower and hide. It’s time to do some soul-searching, exercise your faith and stand up for truth. Never underestimate your power to make a difference, using your mind to generate positivity and your body to take positive action. Courage is contagious and there is strength in numbers. Find your soul-tribe. They will welcome you with open arms! 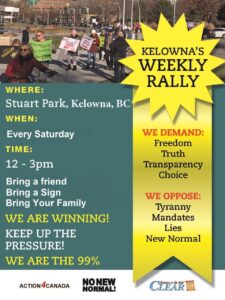 You can print out this page on its own and distribute to anyone, anywhere. 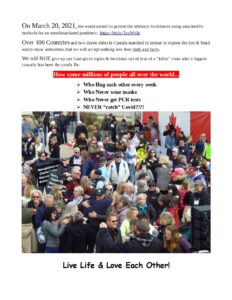 For more bang for your buck, print a personalized two-page Hug Poster and mail directly to that person to let them know that justice is coming for them.

This is a detailed, comprehensive document to help business owners understand what is actually happening in our province/country/world and gives them an abundance of links, resources and tools to keep their businesses open and thriving. Note: this is not for the faint of heart. It takes “Cahoonas” to stand up for democracy!